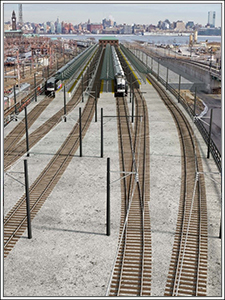 The Long Slip Fill and Rail Enhancement project will allow NJ TRANSIT to operate train service longer and recover more quickly from storm events. The project will modify the Long Slip — a 2,000-foot former barge canal adjacent to the Hoboken Terminal Yard — to eliminate it as a conduit for flood water. Long Slip was affected by the surge created by Superstorm Sandy, contributing to the inundation of Hoboken Terminal and the adjacent Hoboken Yard.

The canal will be filled to an elevation above the Federal Emergency Management Agency (FEMA) base flood elevation, and six new tracks will be constructed on the filled area to serve three high-level ADA-accessible boarding platforms. The elevated position of tracks and platforms will permit the rapid recovery of commuter rail services to and from Hoboken Terminal and its associated Hudson Bergen Light Rail (HBLR) and ferry services, while the main terminal and yard infrastructure are being restored following a storm, and the continuation of services when the terminal and yard are taken out of service in advance of an impending storm. 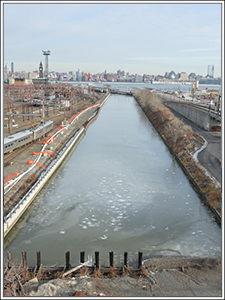 The Long Slip Fill and Rail Enhancement project will advance as a result of a grant awarded by the Federal Transit Administration (FTA), through FTA’s Emergency Relief Program for resiliency projects in response to Superstorm Sandy.

NJ TRANSIT is conducting the Long Slip and Rail Enhancement project in accordance with FTA procedures for transit projects. In October 2016, the FTA issued a Finding of No Significant Impact (FONSI) following its review of the Supplemental Environmental Assessment (EA) / Section 4(f) De Minimis Finding prepared by NJ TRANSIT. To view the FONSI, click here.