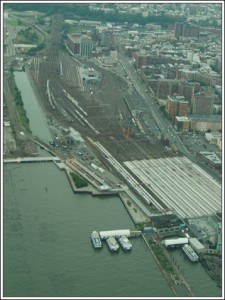 NJ TRANSIT quickly implemented emergency repairs to restore service. Significant restoration of and repair of communication and signal systems, substations and catenary wires, and other key assets were necessary to restore rail service. Restoration and repair were also required on the Hudson-Bergen Light Rail and Newark City Subway systems. Immediate post-storm efforts were also focused on the repair of assets that would restore customer amenities and stations. The process of repairing passenger cars damaged by inundation and restoring the main waiting room, vendor spaces, restrooms and heating and cooling systems at the Hoboken Terminal were prime examples of our initial recovery priorities.

In addition to emergency repair efforts, NJ TRANSIT began the long-term design process to repair or replace damaged substations and other assets and equipment. These projects, substantial in nature, require significant pre-construction design work and are often complicated by the need to sustain continued operations during construction and commissioning. NJ TRANSIT retained leading engineering, environmental consulting, architectural, and construction management firms to advise the agency on the long-term recovery effort and to prepare projects for construction.

Sandy’s impact on the system revealed important vulnerabilities that are now resiliency opportunities. NJ TRANSIT is integrating resilience into new project designs – raising critical assets above flood risk, using materials that can withstand storm surge, and incorporating innovation and best practices into the long-term recovery process. Moving forward, the hardening of NJ TRANSIT assets to allow the to system better withstand, and recover from, future extreme weather events and other forward-looking hazards is a central element of our post-Sandy resiliency program. Below are some examples of these efforts.

Substations are essential to supplying electric power to the catenary, yard and equipment facilities’ systems. Because of storm surge during Superstorm Sandy, the electric components of substations were particularly vulnerable to the corrosive effects of salt water. Repairing and returning to service impacted substations and related electrical distribution systems were central to the full restoration of operations. As most of these substations are only a modest distance above the ground, a significant focus of our efforts is to elevate them sufficiently to reduce the impact of future storms and flooding. Work is being undertaken to advance final engineering for new substations across NJ TRANSIT’s system.

Hoboken Terminal is the second largest transportation facility operated by NJ TRANSIT. It is a major transfer point for rail, bus, light rail and ferry service and is central to the Manhattan-bound work commute. In addition, it is a nationally recognized historic site. The building, yard and its transit, communications, security and passenger convenience infrastructure suffered pervasive and systemic damage from the storm. Its rapid restoration to full service was integral to the vitality of the state’s public transit system. NJ TRANSIT studied ways to harden the various buildings and functions at this complex and is implementing repairs in a resilient manner.

Hoboken Ferries: The restoration of ferry service from Hoboken Terminal has provided another important alternative for cross-Hudson commuters. The ferry slips, ticket offices, crew quarters and other amenities were renovated in a multi-million dollar capital program. Storm surge and subsequent flooding had significantly damaged the ferry infrastructure and caused the suspension of operations. This infrastructure was repaired in a resilient manner.

Meadows Maintenance Complex (MMC): A major NJ TRANSIT facility for rail vehicle maintenance and parts storage, the MMC suffered a degree of water damage, in particular to spare parts, equipment lift tables, and the Wheel-True machine. The protection of materials storage and electrical and mechanical systems, which are sensitive to water, is underway.

Weehawken Ferry Terminal: This major facility was opened in 2006 and provides an important connection between the nearby Hudson Bergen Light Rail line and cross-Hudson ferries. The facility was impacted by tidal surge. The dredging and clearing of its slips were completed in order to restore operations.

Gladstone Branch: A section of the Morris & Essex Line that operates between Peapack and Hoboken, known as the Gladstone Branch, had wooden poles which supported the overhead electrified power line, called catenary wires. The right-of-way suffered significant storm damage resulting in the structural failure of several of the wooden poles. To create a more resilient power system, the wooden catenary poles were replaced with steel structures better able to withstand forces caused by wind and falling trees.