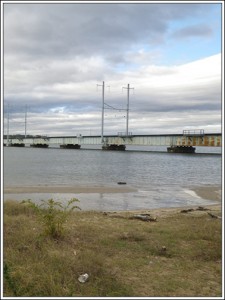 Recognizing that bridge resiliency is essential to safe and reliable operations along the North Jersey Coast Line (NJCL), the Raritan River Bridge Replacement Project (River Draw) will replace the existing swing bridge that carries NJ TRANSIT’s NJCL trains over the Raritan River between Perth Amboy and South Amboy. The new bridge will be on an alignment adjacent to the existing bridge, which suffered damage during Superstorm Sandy. Built in 1908, River Draw is the sole rail link for 17 of the 20 stations on the NJCL to the major job centers of Newark, Jersey City, and Manhattan. It carries almost 10,000 daily NJ TRANSIT customers and moves two million tons of freight annually via Conrail.

The Raritan River Bridge Replacement Project will advance as a result of a grant awarded by the Federal Transit Administration (FTA), through FTA’s Emergency Relief Program for resiliency projects in response to Superstorm Sandy.

NJ TRANSIT is conducting the Raritan River Bridge Replacement project in accordance with FTA procedures for transit projects. An Environmental Assessment (EA) / Section 4(f) Evaluation was prepared in accordance with the National Environmental Policy Act (NEPA) and was made available for review. A public comment period for the document ran from June 14, 2017, through July 14, 2017. For more information, click here.

On October 13, 2017, the Federal Transit Administration (FTA) issued a Finding of No Significant Impact (FONSI) for NJ TRANSIT’s Raritan River Bridge Replacement Project as part of the NEPA process. The FONSI was issued after it was determined the project has no significant effect on the environment. Final Design will start fall 2017 and is scheduled to be complete by the end of 2018. To view the FONSI, click here.

Comments may also be submitted electronically via this website.