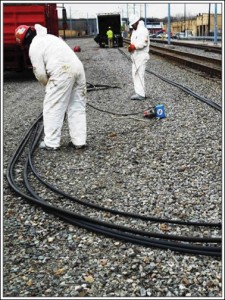 In addition to the Wayside Signals, Power & Communication Resiliency project, NJ TRANSIT is also advancing other projects to repair portions of NJ TRANSIT’s signal and controls systems damaged by Superstorm Sandy in a resilient manner, and also to raise signal assets in areas where those systems are particularly vulnerable to storm surge and flooding. These projects are also receiving funding through the FTA’s Emergency Relief Program. These Complementary Signal resilience projects provide protection and repair for ancillary yet important functions that help keep NJ TRANSIT’s rail operations moving.

At Hoboken Terminal, there are currently trackside cases and conduits that contain control relays, circuits, switch gear, transformers, and power equipment. These existing pieces of hardware will be replaced by new equipment, relocated and installed at higher elevations to afford it better protection from potential storm surges. New control relays and circuits will be installed on the upper levels of Hoboken complex’s Terminal Tower. The substation for the Terminal’s House Power will also be relocated above design flood elevation to the second floor of the Pullman & Immigrant building, improving its resiliency.

A section of the North Jersey Coat Line’s (NJCL) signal and power control system was damaged by storm surge during Sandy. This project would consist of the installation of new, raised signal devices, cabling, and Remote Terminal Units (RTUs), which control power for the catenary traction system when trains are in service along a portion of the NJCL. In addition, wiring, cables and other components that cannot be raised above the design flood elevation will be made more resilient with the use of waterproof components, connections and cabling systems.

Sections of the Hudson-Bergen Light Rail (HBLR) in Jersey City and Hoboken were inundated with storm surge during Sandy, damaging cabling, catenary poles, switches, signal houses and the HBLR’s maintenance facility. NJ TRANSIT continues to replace cable controlling the HBLR that has been exposed to salt water. This project would replace mainline switches, junction boxes, and communication components; perform repairs at grade crossings; and test signal cable throughout the Sandy affected area for repair and replacement. In addition, a new Central Instrument House (CIH), which controls switch movements, is under construction as part of this project. The new CIH will be built at a higher level in order to be more resilient against future weather events.

Sandy resulted in the inundation of many sections of the Newark Light Rail System (NLR), damaging track; signal and communication components; switches; fiber optic and co-axial cables; and electrical wiring. This equipment must be repaired or replaced, which will include resiliency efforts to protect the NLR system from possible future extreme weather events and prevent the loss of equipment by using methods such as water tight cases.